If you’re looking to make your home more energy-efficient by reducing the amount of sunlight that can enter through the windows, then investing in solar screens is one potential option.

But given the variety of window attachments that you can install at your property, are solar screens worth the significant investment? Let’s find out.

What Are Solar Screens? 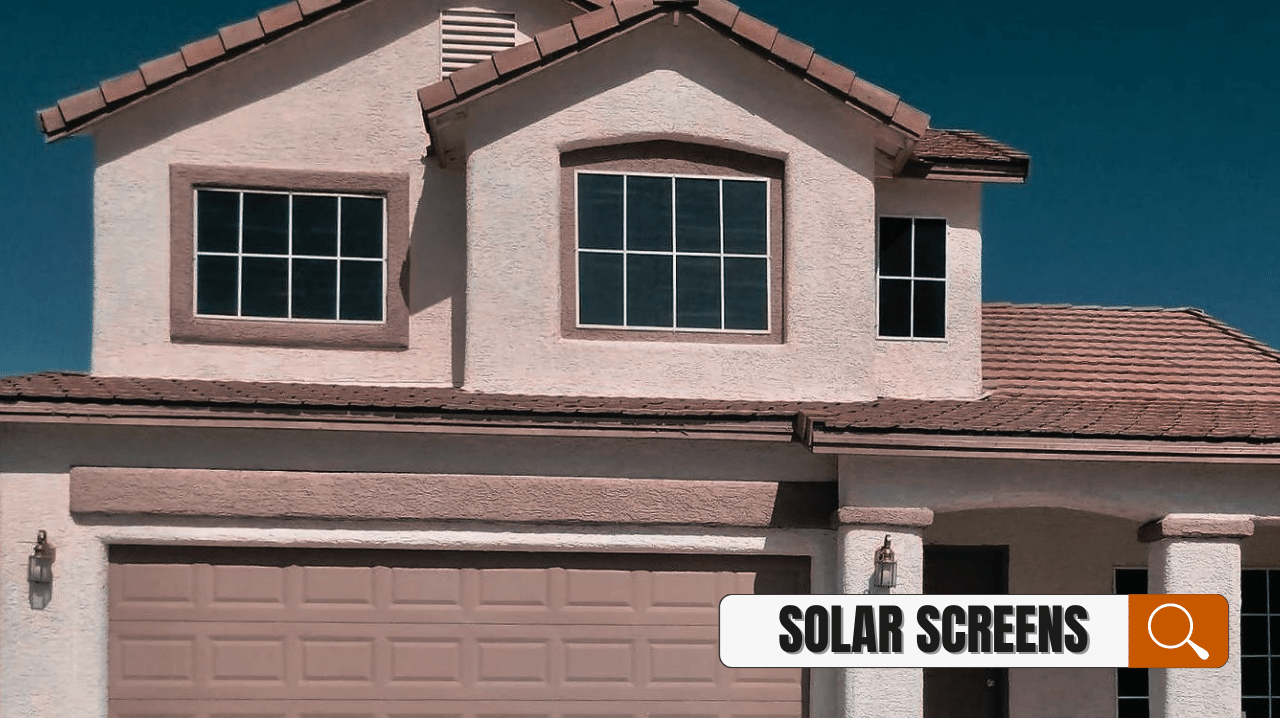 And although a solar shade doesn’t block out the sunlight entirely, homeowners tend to notice a discernible difference in the level of light that floods their homes on a daily basis following the installation of the screens.

Solar screens come in various shapes, sizes, and designs and are typically custom fitted for your home’s windows. We would always recommend hiring the services of an experienced fitter to handle the installation, so you can get the full benefit of the screens once they’re installed.

So, because solar screens are just one of a number of window additions that you can install, we want to introduce you to seven things you need to consider before you invest in solar screens, so you’re sure that they’re the window addition that you’re looking for.

Seven Things You Need to Know About Solar Screens

1. You Can Expect to Save Up to 33% on your Energy Bills with Solar Screen Installation

Solar screens undoubtedly work. In fact, they help homeowners in states like Texas, Nevada, and Arizona save up to 33% on their energy bills each year.

One of the primary roles of solar screens is to block out the sun from your home, which keeps the inside of your home much cooler in the summer months. For those living in particularly hot climates, this reduces their reliance on an HVAC system and the ongoing energy costs that go with it.

When the weather changes, solar screens are also put to good use in the winter months. Because they’re capable of retaining heat, you don’t necessarily have to power your heating to full blast to warm every room in your home.

According to Home Advisor, the average solar screen installation costs $300 per window, with the typical cost falling within the $120 - $480 range.

To work out the price for your installation, you can also calculate the cost of solar screens per square ft – which is between $4 - $5 on average.

Installing solar screens on several windows at the same time will reduce the cost of installation somewhat, so it’s a worthwhile investment to upgrade every window on your house at the same time.

Estimates indicate that the average American home has 22 windows, meaning it would cost approximately $6,600 to install solar screens on every surface without taking into account any potential savings.

3. Solar Screens Protect Your Furnishings from the Sun’s Rays

One thing that homeowners often fail to recognize is that the UV rays from the sun that enter your home can damage your interior furnishings.

As the sun projects its rays directly onto your tables, sofa sets, and various other items in your home, its rays can cause discoloration and can damage your favorite pieces.

Solar screens are known to block anywhere between 65-90% of these rays from entering your home through the windows, which offers an additional layer of protection to your furnishings.

As well as preventing UV rays from entering your home, solar screens work to provide internal glare control, which helps to create a relaxing indoor atmosphere.

You also don’t need to worry about the sun’s glare disrupting your work or leisure time, as the screens will reduce glare from your internal devices.

Another added benefit is that solar screens prevent people from looking into your home, which boosts privacy from prying eyes.

For this reason, they’re a decent option to consider on the ground level of your property, as they provide additional protection from passers-by.

5. Solar Screens Are Difficult to Maintain

One drawback of solar screens is that they’re not particularly easy to clean and maintain. The mesh fabric is often affected by air pollutants which can cause it to lose color. This isn’t ideal if you live in the city.

Removing the dirt from the mesh of a solar screen is a laborious process that requires significant elbow grease, which is a pain for many homeowners. As a result, most people hire an outside cleaning firm to take care of the maintenance of their solar screens, which increases their overall cost.

6. Solar Screens Alter the Appearance of Your Windows

While it might seem like an obvious thing to say, attaching fabric solar screens to the exterior of your windows alters the appearance and aesthetics of your home. For some homeowners, it’s not an overly attractive look as it causes the home to look a little less inviting than it typically would.

What’s more, the fact that they’re permanent means you can’t easily take them down or replace them without undertaking a significant project.

If you don’t like the idea of installing solar screens on your home’s windows, then you may like to consider some of the alternatives as we introduce below.

7. There Are Several Alternatives to Solar Screens

Solar screens are just one of the ways of preventing harmful UV rays from entering your home. Alternatively, you could opt to install one of the following on your windows if you’re not keen on screens:

The Verdict: Are Solar Screens Worth it? 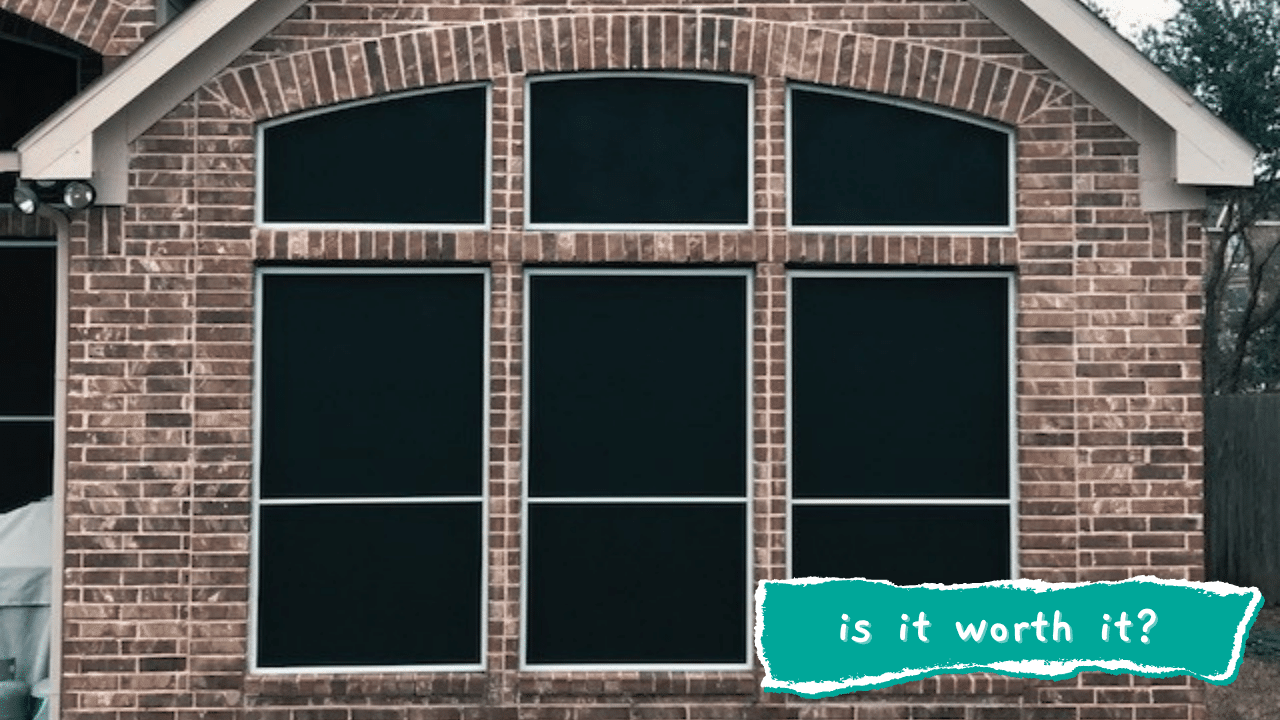 We would say that the decision on whether or not solar screens are worth it is very much down to personal preference.

Some homeowners will be put off by the aesthetics of solar screens, as they undoubtedly change the way that your house appears from the outside. But in terms of their energy-saving potential, solar screens are undoubtedly effective. And by reducing the number of UV rays that enter your home, the screens also protect your furnishings from sun damage.

Ultimately, if you’re looking to reduce your home energy bills over time and have the funds available to invest in the installation of solar screens, then they’re undoubtedly a worthwhile investment.

If not, you could always look at one of the alternatives introduced above if you’re not sold on the features of external solar screens.