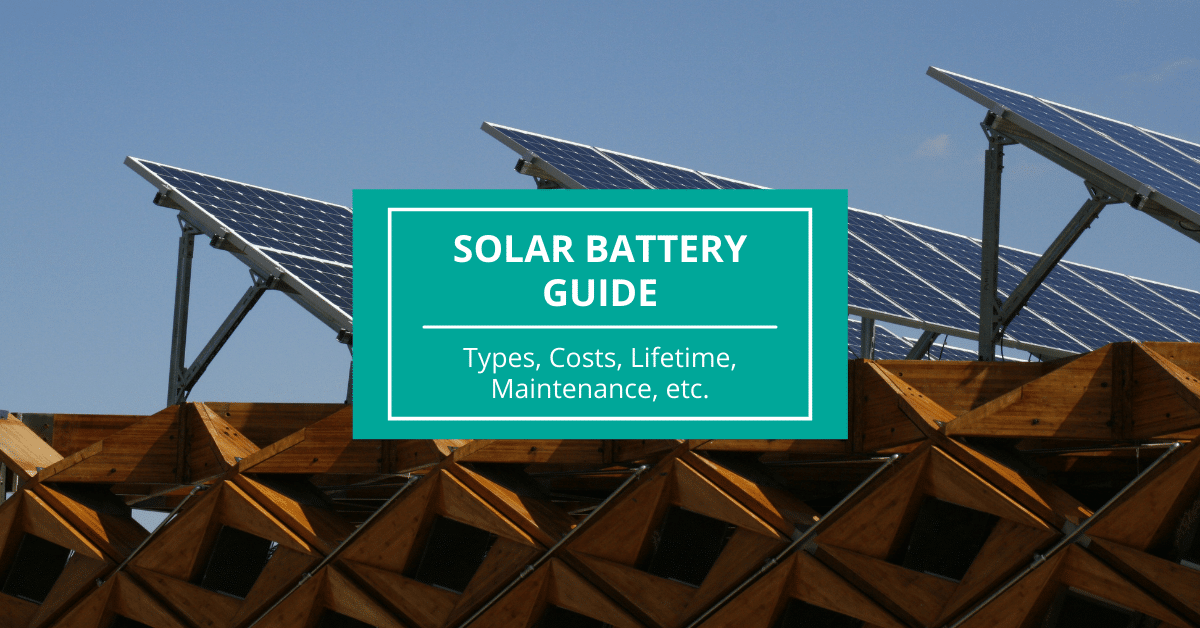 Solar power is an increasingly popular solution for people who want to enhance their sustainability while saving money and improving the value of their home. One of the important questions for homeowners who are considering investing in solar power is whether or not to integrate a solar battery into their system. Solar batteries have a significant upfront cost but can greatly enhance the benefits of investing in solar power. With this in mind, let’s take a look at everything you need to know about solar batteries.

What is a Solar Battery?

A solar battery is literally a battery for your home that integrates with your solar system much in the sense like a car battery is a battery that supports your vehicle. When you have solar panels, they often generate more energy than your home can use. This extra energy is typically uploaded back to the grid.

However, if you have a solar battery installed, extra energy is instead first used to charge the battery. Then, when the solar panels are not producing enough power to meet household needs or not producing power at all – like at night – the battery kicks in and provides power to the home. This significantly decreases reliance on the traditional power grid and can also greatly enhance cost savings as you’ll use less electricity from the grid.

One of the first things to understand is that solar batteries are not made the same. In fact, there are many different types with significant differences in their functionality. Typically, solar batteries fall into one of three main categories:

These batteries are actually quite different from one another in many ways. If you are considering a solar battery for your home solar installation, there are a variety of factors that should be considered. Next, let’s take a look at how these different types of batteries perform in different dimensions.

Which Battery is Best?

Understanding the best solar battery means getting a sense of how each performs on different metrics. There are many things to consider including cost, lifespan, charging time, size, and maintenance. Let’s take a look at how these three types of batteries stack up on each of these categories.

This is one of the most important factors for many people. Like solar panels, solar batteries represent a significant upfront investment. Flooded lead-acid are the cheapest, coming in as low as $200. Sealed lead-acid are more pricy, and lithium ion are the most expensive by far at upwards of $5,000. It is important to realize that you’ll likely need multiple lead-acid batteries while systems typically work with one lithium ion.

Lifespan is another critical factor to consider as you’ll ideally want to replace your batteries as little as possible. The worst performing is flooded lead-acid which has a typical lifespan of four to eight years. Meanwhile, sealed lead-acid batteries will last seven to eight years. Finally, lithium ion batteries have a very long lifespan, typically lasting ten years to fifteen years.

Perhaps a more accurate estimate of lifespan involves charge cycles, the number of times a battery can fully be charged and discharge energy. Flooded lead-acid batteries have between 200 and 300 cycles. Sealed lead acid batteries perform better at 700 to 800 cycles. Finally, lithium ion batteries have 5,000 to 7,000 cycles.

Charging time is important because you want a battery that can take recharge rather quickly. This will ideally mean you’ll have power available when you need it. Flooded lead-acid batteries can vary significantly, ranging from a few hours to an entire day. Sealed lead-acid are much more efficient, charging at five times the speed of the flooded version. Meanwhile, lithium ions can vary a bit as well but typically take at least three hours to fully charge.

Thus, when considering the different types of batteries, the best for most solar systems is typically a lithium ion battery. Its major drawback is the upfront cost; however, it has strong performance, relatively fast charging, and lasts much longer than competitors. It also typically enables space savings. Homeowners who are able to invest in a lithium ion battery will be happy with their purchase and should only have to replace the battery once during the life of their solar system.

For homeowners investing in solar power, one of the major decisions involves deciding whether to send excess power back to the grid or to store it in a solar battery. Solar batteries represent an additional upfront expense for solar systems; however, they also allow homeowners to better leverage the benefits of their solar system.

When considering whether or not to purchase a solar battery, there are a number of factors to consider. For those who have limited capital, a sealed lead-acid battery is probably the best investment as it has moderate durability and performance. However, for those who can afford the initial investment, the optimal product is the lithium ion battery, which lasts a long time and performs at a high level.