Is Dethatching Good for Your Lawn? (And Why You Need To)

Dethatching your lawn is crucial in keeping the grass and soil healthy. Even if you are on top of mowing and fertilizing your lawn, thatch may build up before you know it. Thatch refers to a layer of dead and living plant material on your soil's surface, commonly composed of shoots, crowns, and roots.

If you're wondering if dethatching is good for your lawn– let's discuss everything you need to know.

table of contents
Thatch: A Barrier to Healthy Lawns
Is Dethatching Good for Your Lawn?
When Should You Dethatch Your Lawn
How to Dethatch
Can Dethatching Hurt Your Lawn?
How to Prevent Thatch Build-up from Returning
Frequently Asked Questions (FAQs)

Thatch: A Barrier to Healthy Lawns

As previously mentioned, thatch refers to a layer between the soil and the grass that is composed of:

A thin layer of thatch is ideal if it's about half an inch. This helps maintain consistent soil moisture and temperature. But once it gets thicker than that, it will only cause you problems.

Grasses produce thatch at different rates, depending on the variety. Warm climate grasses (Bermuda and Zoysia) tend to form thatch faster, so they will need more frequent dethatching. Meanwhile, cool-season grasses such as bluegrass, fescue, and ryegrass gradually develop thatch.

Is Dethatching Good for Your Lawn? 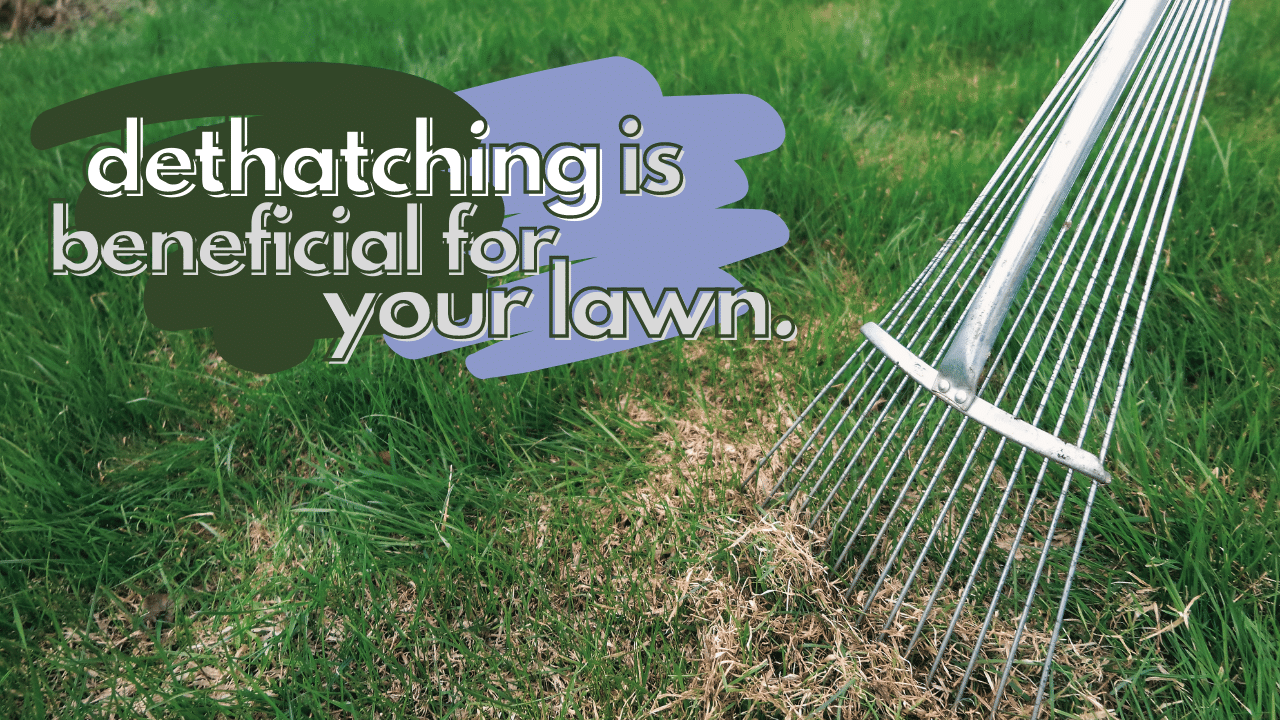 Dethatching is beneficial for your lawn when it comes to thick layers of thatches. Thatch buildup will only prevent the moisture and air from getting to your plants and soil. Over time, the grass will deteriorate in color and strength. So, if you leave the buildup for too long, it might kill the grass and damage the soil at the same time.

Important Note: It may be challenging even for re-planted grass to flourish when the soil is damaged. It may also turn into a nesting ground for insects, breeding mosquitoes and diseases.

When Should You Dethatch Your Lawn

Before you consider dethatching, it would be best to check your thatch layer by digging up a small amount of your lawn grass and soil. Afterward, measure the thatch. Once it gets thicker than an inch, consider dethatching at your earliest convenience.

Timing is of the essence when it comes to dethatching your lawn. Ideally, schedule the dethatch during the peak growth time of the grass. This helps the grass recover faster from the stress of dethatching.

Most homeowners hire local lawn care professionals for their dethatching needs, especially if the thatch is thicker than 2 inches. Thatches of this thickness often need more than one dethatching process.

If you want to do a DIY process, the good news is– there are different options and tools you can use to do so. But before you do this, you may want to mow down your lawn first.

Regardless of which among these three tools you decide to use, remember that following some form of aftercare is essential. After dethatching your lawn, don't forget to rake up all the excess thatch. Adequately water and fertilize the lawn.

Can Dethatching Hurt Your Lawn? 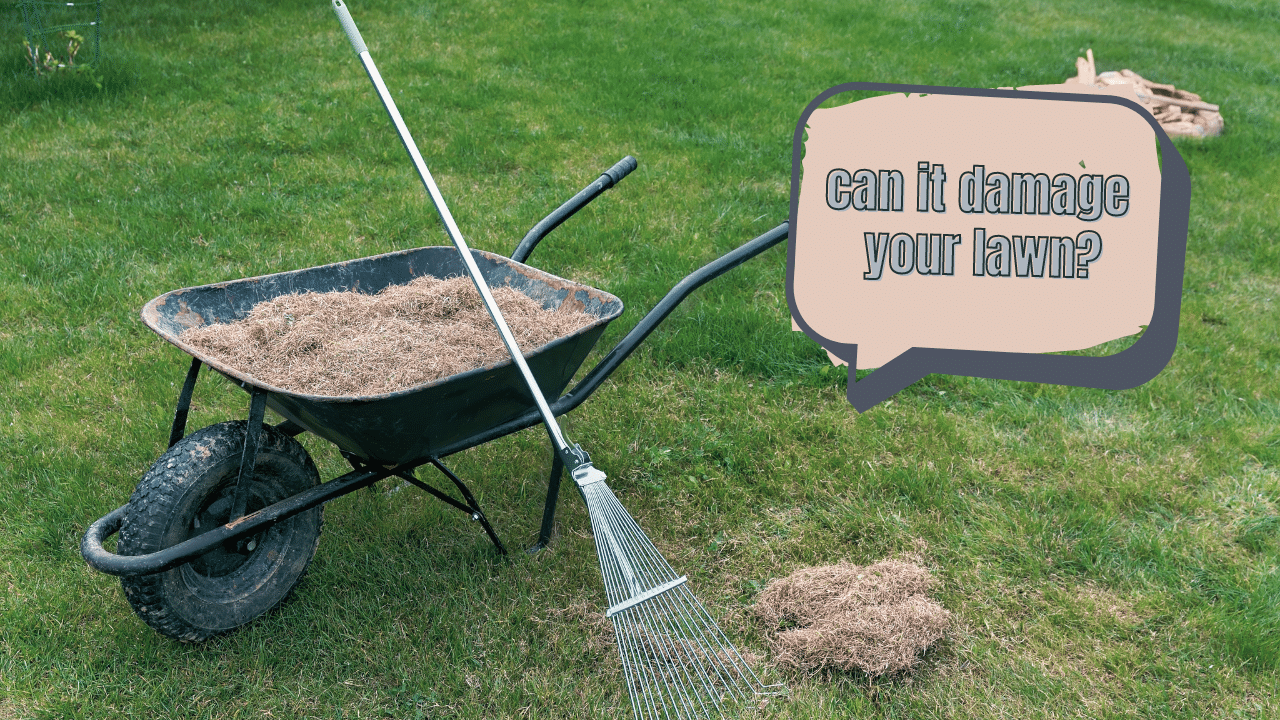 On the other side of the coin, dethatching may also damage your lawn as it tears and rips off the dormant turf. It may affect the grass' ability to recover, especially after hard winter (winter injury, snow mold, and ice damage).

Using power equipment for your dethatching needs may also bring up crabgrass and other noxious weed seeds, which may overtake your lawn before you know it. This may lead to a future infestation.

So, if you dethatch excessively or when it's not needed, this may only bring more harm to your lawn than good.

How to Prevent Thatch Build-up from Returning

To maintain your lawn's appearance, always keep an eye out for the thatch buildup. Proper turf  management will also reduce the frequency you need to rip and tear the grass using dangerous machines/tools.

As previously mentioned, some grass species develop thatch quicker than others. This includes Kentucky bluegrass, which has an aggressive growth that includes thatch.

Expert Tip: If you mix in some perennial ryegrass or tall fescue on your lawn, this will reduce the likelihood of thatch buildup in your yard.

Another thing to do is test the soil periodically to monitor its acidity and nutrient levels. You will need to determine the amount of lime you need to maintain healthy lawn growth and microbial populations that discourage thatch.

Other methods to control thatch are good watering, proper mowing techniques, and fertilization. Avoid setting the lawnmower too low or over-fertilizing in such a short time, as both may result in rapid thatch buildup.

How do I know if I have a thatch problem?

Thatch is present in healthy grass. Only when the thatch layer becomes too thick, preventing water and air from reaching the grassroots, will you have a problem. There is no problem in a thatch layer that is less than ½ inch thick, so you should leave the grass alone. Poke around the grass until you locate the brown layer towards the bottom of the grass blade to determine the thickness of the thatch. Poke a hole through the brown layer to the top of the soil using your finger or a stick. The thickness of the thatch should be measured.

Is there a right time to dethatch?

Dethatching does a lot of harm to your grass, so do it while it's growing to repair the damage before the next dormant period. Warm-season grass may be dethatched after it begins to grow in late spring or early summer. It's preferable to avoid doing it in the middle or end of the summer. Cool-season grasses should be dethatched in the early fall (early September in zone 5) when the grass is at its best. Fewer weed problems may be observed when dethatching during fall.

What is the best way to dethatch?

Power dethatchers and power rakes are particularly effective. Meanwhile, lawnmower dethatching attachments can be relatively inefficient. Core aeration is the most effective approach to eliminate thatch. Aeration of the core also improves soil structure, addressing two issues at once. In clay soil, core aeration works best in the spring when the soil is moist. Getting the machines to dig deep enough to produce a good-sized plug might be challenging by the fall. (Related: Aerating vs. Dethatching: Which is Better for Your Lawn?)

What is the proper aftercare after dethatching?

After the dethatching process, your lawn will probably look worse for wear after a few weeks. Ideally, bolster your lawn using quality fertilizer and deep watering. Remember that your turfgrass requires some well-needed TLC to bounce back to its previous vibrance.