How To Prevent Wasps From Building Nests On & Around Your House: A Practical Guide

If you're like me, wasps can be pretty intimidating; just knowing that they can sting you more than once freaks me out. To make matters worse, they seem to love making nests under the roof outside and always seem to come back. So I took the action of finding out just how to get rid of them both on the house and around it permanently!

A few DIY ways seem to work for households to prevent wasps from building their nests. These include wasp-repelling plants, spraying clove-geranium-lemongrass oil blend, plain soap water, and peppermint oil on spots where they could build nests. If all else fails, try to use wasp traps.

Though these methods may seem that they won't work, studies show otherwise and might blow your mind with their effectiveness. So take the risk and see what happens; it's not like it could hurt anyone now. 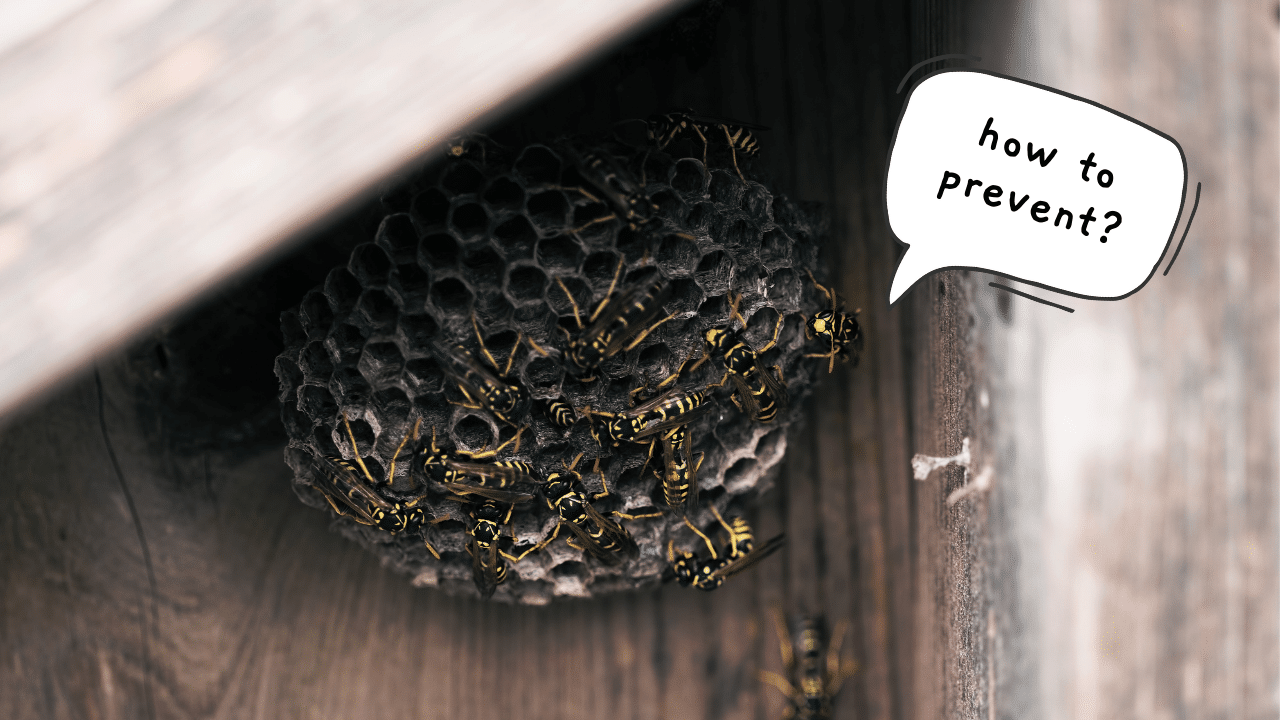 Try spraying the area once a day in the beginning and seeing if it works. Clove-geranium-lemongrass oil blend was pointed out by a research article published in the Journal of Pest Management Science:

"This mixture of essential oils can repel wasps. Try mixing the oils with a few drops of water, around about seven, and then spray in the areas where you find Wasps commonly making nests."

According to an eco-friendly wasp removal expert in Southeastern Pennsylvania, you can mix two tablespoons of soap with water and apply it directly to the nests to remove wasps. You might wonder how soap water gets rid of wasps; it clogs their breathing pores which ultimately causes them to die almost instantly.

A peppermint oil-based ingredient can be found in many organic pest control products as they are the main ingredient that's effective in repelling wasps and other flying insects. What makes it more credible is that it was also mentioned in the Journal of Pest Management Science:

"Like any other trap, Wasp traps attract insects with either food or sugary water, allowing them to get inside. Which kills wasps over time as they can't get out and either die of their energy being drained or starvation? It's quite a simple trap that can be made at home with suitable material and guidance on making one."

How Experts Get Rid of Wasps

If these home remedies don't work, it would be best to call pest control to take control of the situation, especially if the wasps are hostile. Professionals would come to your household and inspect it to see what nests there are hanging or on the ground. In doing so, they can safely determine the best way to proceed in removing the nests.

Once the nests have been located, they will eliminate the wasps either on or around the nest. These substances will be used with precaution to ensure that they are safe for the pest controllers and homeowners. If the wasps don't respond to the chemicals used and keep coming back in different areas, the experts will have to be called back to either set up or use different methods to ensure they won't come back.

Another direction they might choose to go with depends on the nest's location; the pest control would put aerosols, dust, or liquids onto the nest to get rid of the wasps. Treatments would remove the wasps from the nest, allowing the experts to move and eliminate the nest safely.

The pest controllers will put up bait stations similar to the wasp nest to ensure that if any other wasps weren't exterminated the first time flying around, they wouldn't make a new nest. Instead, wasps will be attracted to the bait stations to leave your household alone. (Related: Wasp Nest Problems? Here's How Much You Should Expect Wasp Nest Removal To Cost)

Why do Wasps Build on Houses?

It's pretty irritating how wasps always seem to attract a house and build either on your house or around it. Unlike humans, they don't need to build their tiny homes away from the harsh environment. They will construct their nests just about anywhere as long as it is a sturdy base to hang from and a little bit of cover from the weather.

It explains why they always seem to be either underneath the roofs outside or porches of some sort and not on weak tree branches. Things that wasps usually look for when building their nests are ceilings or overhangs in corners where they can be more easily protected. Like under the roof outside that keeps their nest safe from too much sun, the rain, and harsh wind that might make their nests fall.

The most commonly found wasp is the paper wasp that uses wood fibers to create its nests. The queen wasp would use the wood fiber to create a pulp-like material of wax in her mouth, and after chewing it would spit it out and start constructing the nest. It would then later be used to lay her eggs and start a colony, which would then set the stage for a new generation of wasps creating new territories.

The main reason why wasps build nests around your house is that they find that there is ample food in your area. Now, this could be both good and bad as wasps are great pest controllers getting rid of all those bugs and insects; however, the bad news is that you have many insects and wasps that seek more food.

Wasps are seen as pests, but they can also be beneficial to your household, removing insects and other bugs. However, they can get hostile over their nests when people get close or tamper with them. That's why if you don't want them around anymore, look at these simple methods to remove them from your house and to prevent any other nests from popping up. 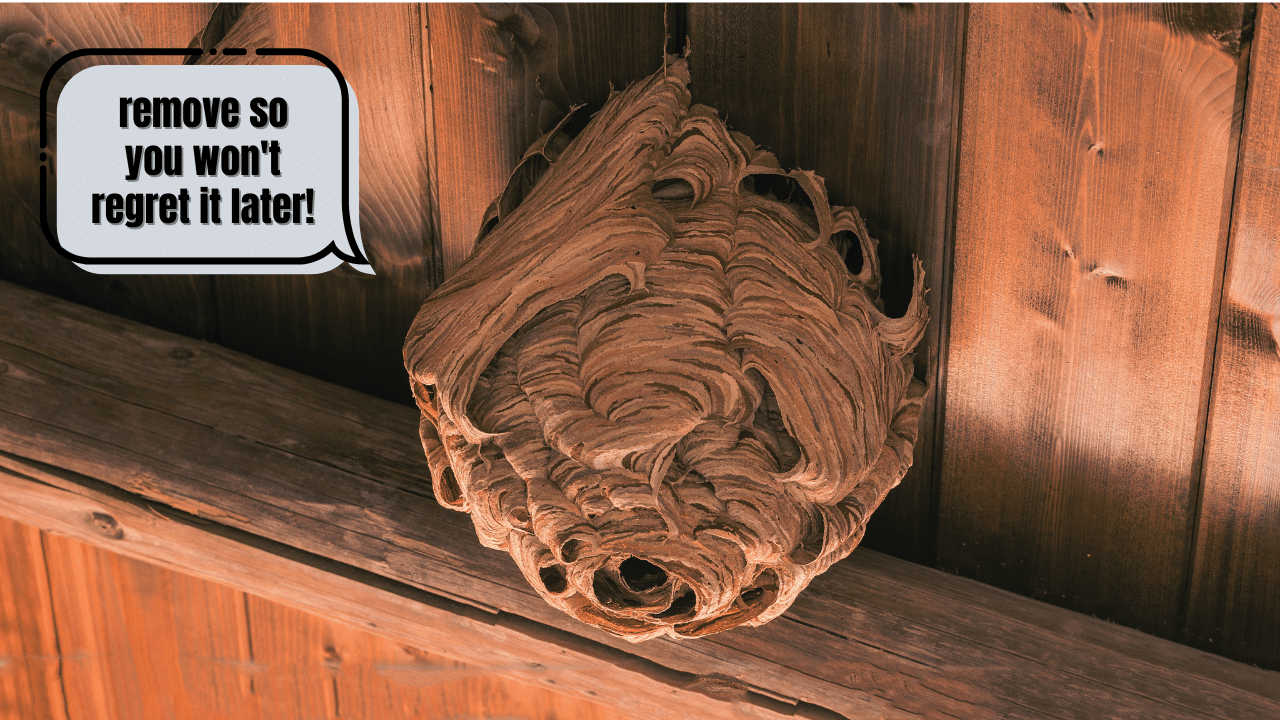 If it is a safety concern for you to do these things by yourself, seek expert help to get rid of the wasps for you safely. Especially people that are allergic to wasps shouldn't try and take matters into their own hands. Rather be safe than sorry and do things right so you won’t regret it later.

A Guide on How to Remove Epoxy Flooring

A Guide on How to Remove Epoxy Flooring

What Size Tankless Water Heater Do I Need? (A Comprehensive Guide)

What Size Tankless Water Heater Do I Need? (A Comprehensive Guide)

Tankless Water Heater Pros & Cons: Is It Worth It?

Tankless Water Heater Pros & Cons: Is It Worth It?