Aerating vs. Dethatching: Which is Better for Your Lawn?

Proper maintenance is essential in keeping your lawn green and healthy. This includes two of today's most popular lawn care maintenance: aeration and dethatching. While both are ideal for improving and maintaining the good health of your lawn, there are specific differences between the two that you need to be aware of.

Dethatching removes a thick layer of thatch on the topsoil, whereas aeration breaks up and treats the soil. Dethatching can take a toll on the grass. Meanwhile, aerating is a much-simpler process that encourages a quick healthy lawn rebound.

Let's discuss the differences between aeration and dethatching so you can determine the best option for your lawn care needs.

The aeration process loosens the soil, releases the pressure in compacted soil, and enables the grass to get more access to various necessary nutrients. This encourages healthier root growth. (Related: Lawn Aerator: What Is It And Do You Need It?) 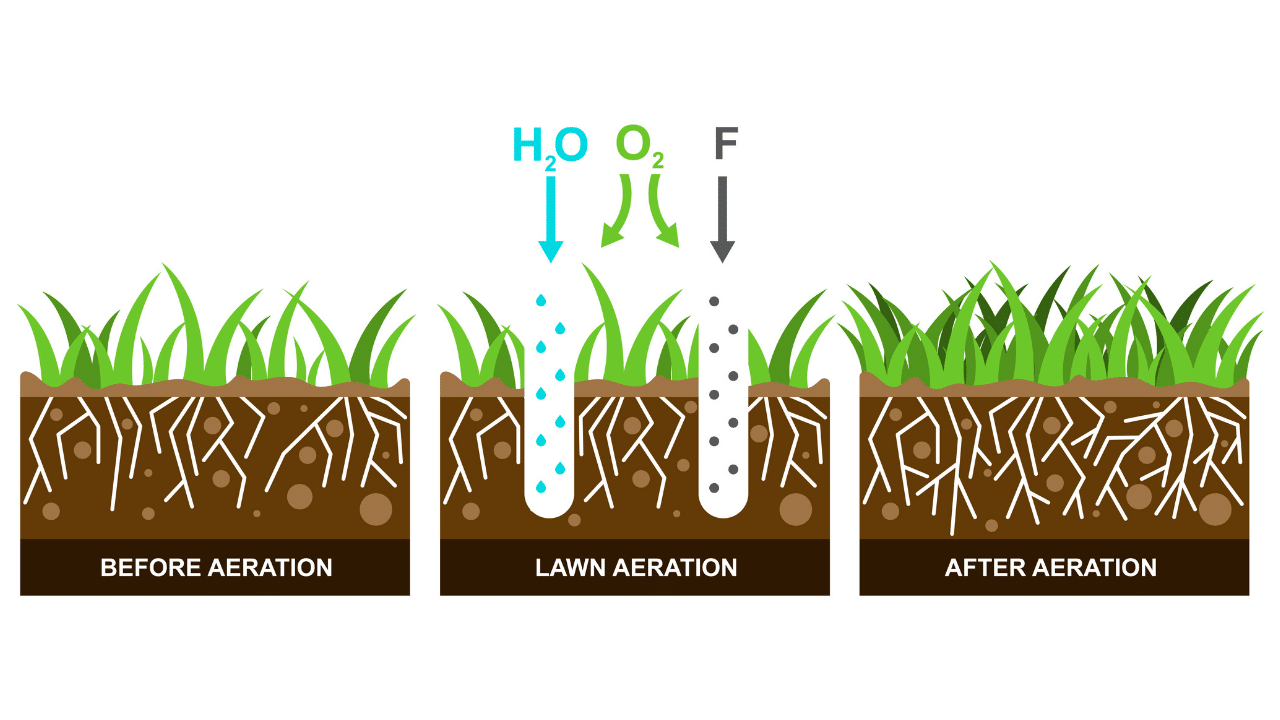 Aeration involves removing small plugs of soil from the land's surface and letting the remainder breathe. Keep in mind that compacted soil happens because of several reasons. And when that happens, water cannot get through the earth as intended, which may affect the growth of the grass.

Some telling signs that your lawn needs to be aerated:

On the other side of the coin, the dethatching process removes the excess "thatch," which refers to a layer of dead grass, leaves, and roots on the soil surface. You will need to ensure only a healthy layer remains atop. 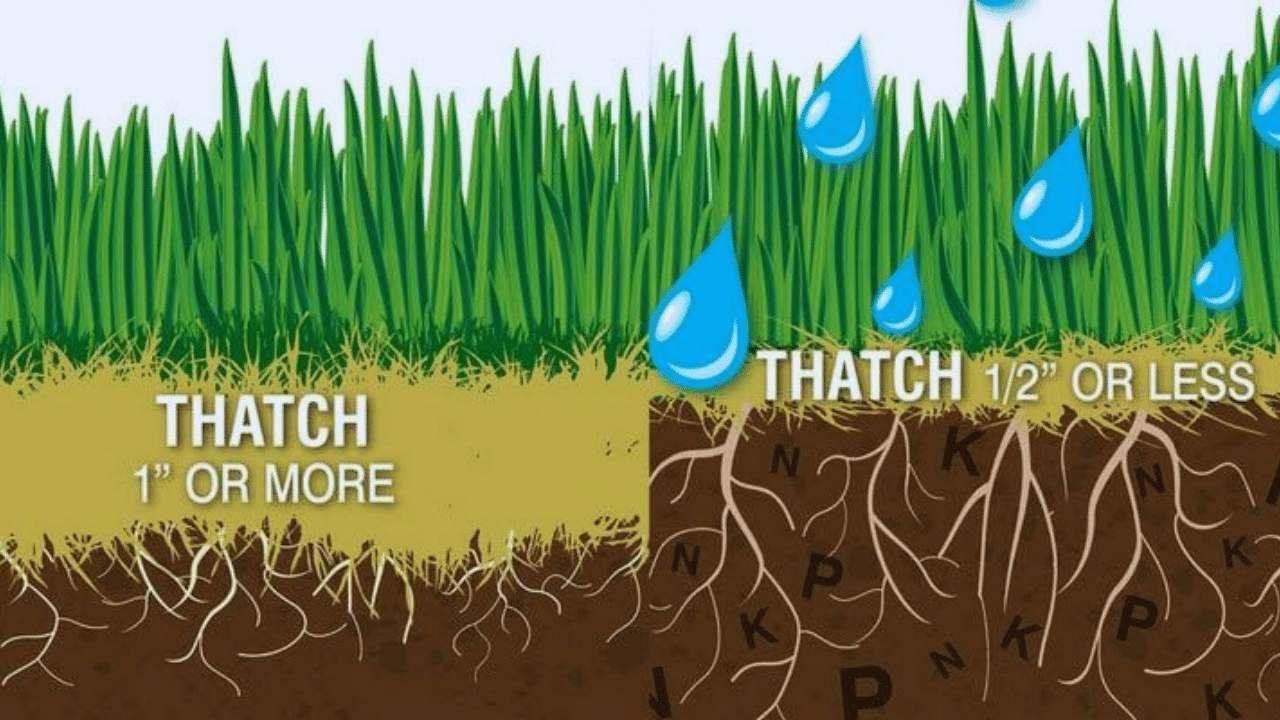 Once thatch growth on a lawn goes out of control– it forms a thick cover that stops water and air from reaching the soil's depth. This will suffocate the roots and ultimately kill off the grass. Lastly, it may also protect the ground from extreme temperature changes.

Important Note: Having a small amount of thatch can be healthy and beneficial for your yard, as a think layer makes it more resilient against daily wear and tear. It also keeps the soil moist and supplies nutrients to it.

Common factors that cause heavy layers of thatch on your lawn:

When to Dethatch and Aerate 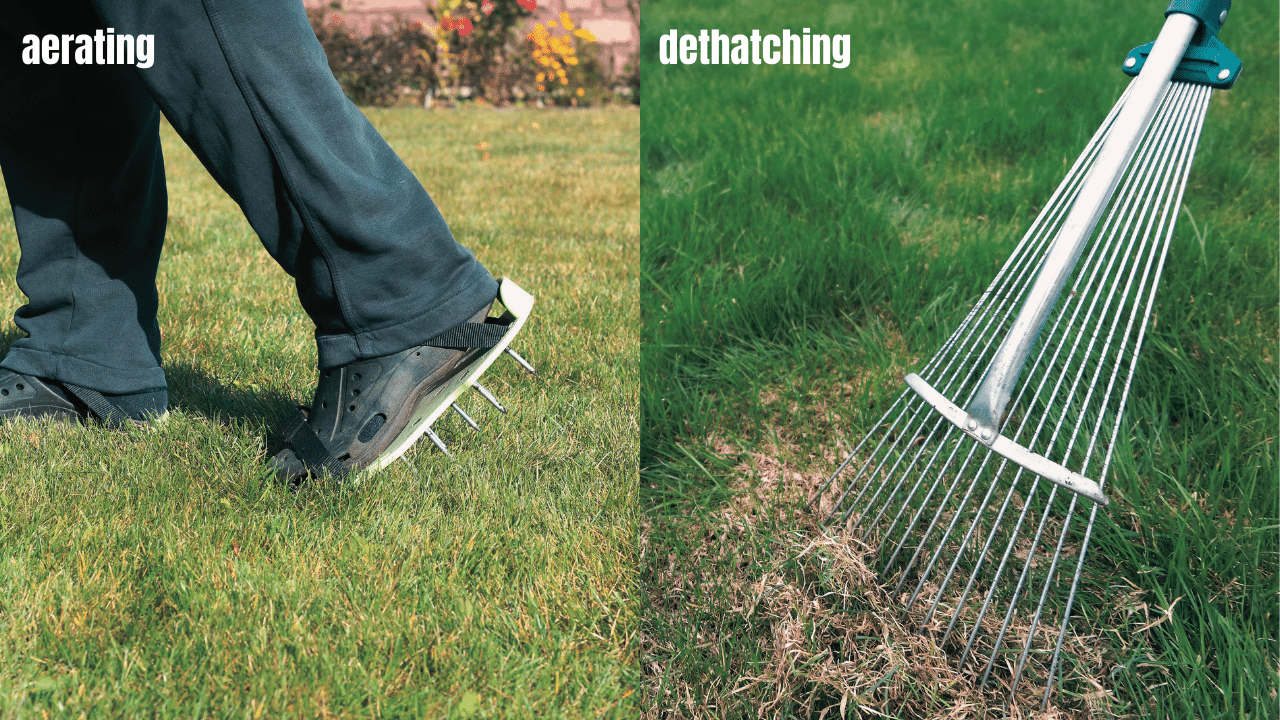 The right time to dethatch and aerate will ultimately depend on where you live and the type of grass you have on the lawn.

Ideally, dethatch during the growing season in your region to minimize potential stress on the lawn as much as possible.

Important Note: Avoid dethatching when the lawn enters dormancy or is facing heavy stress levels. Dethatching in the middle of the summer or during a drought may also severely damage your grass, so be careful!

How Often to Dethatch

In most cases, dethatching is only recommended by professionals if thatch takes over your lawn. If you're keeping a close eye on maintaining a thin, healthy thatch layer– that's fine. This will enable various nutrients to reach the soil and allow the grass to grow thick and healthy.

You may only need to dethatch the lawn once every few years, given proper lawn care activities. But, specific grass species such as bermudagrass, bentgrass, and Kentucky bluegrass are known to form thick thatch layers over time. These grasses will need routine dethatching at least once a year.

Similar to dethatching, it would be best to conduct aeration during the growing season in your region. Doing so will ensure that your grass will quickly bounce back.

How Often to Aerate

Homeowners with sandy soil and few drainage issues will only need to aerate once every two to three years. Meanwhile, lawns with heavy clay soil and heavy foot traffic will need aeration every year (some will need as much as twice a year).

Can I apply herbicide after aerating?

It depends on whether you intend to overseed or not. If you're not going to overseed, use a pre-emergent herbicide to keep crabgrass from growing in the holes. Hold off on a broad herbicide application if you want to overseed after aeration. Synthetic herbicides can damage new seeds and hinder the development of young grass; if weeds appear, spot spray to ensure a healthy lawn.

Should I mow my lawn before or after I dethatch or aerate?

Before you dethatch or aerate your lawn, mow it. You'll want to cut it down to half (rather than one-third) of its original height.

How can I tell if my lawn needs aerating?

The soil beneath your lawn becomes compacted over time, and thatch builds up. It's time to aerate your property if it wasn't done last year. At the very least, you should aerate your lawn once a year. Most grass species thrive in the fall. Yards that are heavily used, especially those grown on thick clay or subsoil, may require more frequent aeration.

What time of the year do I need dethatching?

This is dependent on the weather, the soil condition, and the type of grass. Dethatching is often done in the springtime. Because you are removing mass from the soil, this step should be performed before any other treatments. Only when the dethatching procedure has been completed should you fertilize, lime, or overseed.